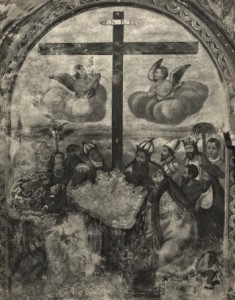 Yet, the most valuable jewel of Anagni is hidden beneath the Cathedral in the Crypt.

There, shrouded in silence and in the shadow, are kept the wondrous frescoes painted by different artists from 1104 to 1250. The entire Crypt is frescoed and looks like a collection of the history of painting from the Byzantine style to Giotto. Few steps away the Palace of Boniface VIII features a fine example of a 13th century patrician palace where in 1303 the Pontiff suffered an insult, namely a “slap “, at the hands of a group of conspirators guided by Sciarra Colonna.

In its bare rooms with vaulted ceilings, partly frescoed and decorated are kept historical relics and remains. In the middle of 1100 the civic authorities built a bright Civic Palace which strikes the eye with its unusual style characterized by majestic stony archways small open galleries and two-or-three light mullioned windows which were added later in the 15th century.

At the end of the road there is the lively façade of the Barnekow House, a private l4th century mansion in a quite remarkable Romanesque style with an external staircase covered by an open gallery with a small balcony and two arches.

Top
We use cookies to ensure that we give you the best experience on our website. If you continue to use this site we will assume that you are happy with it.OkRead more